Posted on December 7, 2017 by sineanahita 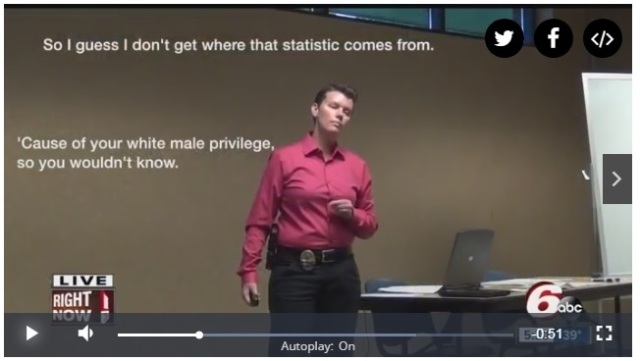 Recently, there has been a lot of attention paid to white fragility, a term coined by Robin DiAngelo (2011) to explain how white people are triggered to hyper-react to even low levels of racial stress. DiAngelo notes that white people typically are protected from situations of racial difference, and usually have little opportunities for meaningful interaction within racially diverse social spaces. They hold racist views and racist assumptions, and generally do not recognize their beliefs as racist because they have been insulated. The protections for whites from uncomfortable racial situations renders white people incapable of tolerating racial stress, even when the racial stress level is quite low.  In short, when insulated white people are confronted with situations in which race is an issue, they become triggered and react defensively with anger, silence, or by walking out of the situation. Lopez (2017) analyzed the recent protests, riots, and violence in Charlottesville as an example of white fragility, noting that the pro-white marchers are angry and upset because their racial privilege is being challenged by the Black Lives Movement and other recent events.

Media images of the Charlottesville incidents demonstrate that the vast majority of the white nationalists are men, many of them quite young. So what happens to white fragility when race–whiteness–intersects with sex and gender?

One of the earliest masculinities studies scholar was R. W. Connell, now Raewyn Connell. Connell developed the concept of the patriarchal dividend, defined as the set of privileges and advantages that accrue to men over their lifetimes (Connell 1996). On average, and apparently throughout history, men as a social group are wealthier than women, have more social power, have higher status, and have more control over resources both material and human. Men rarely recognize the existence of the patriarchal dividend, understanding their situation as being “natural” and “just the way things are.” In other words, men who benefit from the patriarchal social system are generally not aware that they are accruing a lifetime of dividends. Like white people who are insulated from issues of race, men from dominant groups are often insulated from issues of sex and gender.

So if we take the two concepts–white fragility and the patriarchal dividend–we can create another concept: white male fragility. When white men who are privileged and advantaged by their race and sex status are called out by others on their racism and sexism, white male fragility causes them to hyper-react. The incident with police captains Carri Weber and Scott Arndt of the Plainfield, Indiana police department provides an apt illustration.

The incident took place in early November, 2017. The Plainfield police department held a training workshop on trans issues and violence. Members of the police were there, as were some local town and school district officials. As one of the trainers was describing the statistics about anti-trans violence, a white male police officer–Arndt–interrupted to challenge the trainer. He denied the relevance of the statistics that show that trans people are over three times as likely to be victims of violence than non-trans people. Weber, a white woman who is a prominent LGBT activist as well as a police officer, told him that the reason he did not realize the reality faced by trans people is because of his “white male privilege.” Within moments, Arndt was shouting at Weber, the trainers, and the head of the police department. The trainer and others urged him to calm down, but he continued to shout, then angrily marched to the front of the room to shout some more, and finally walked out of the room. Clearly, his behavior demonstrates that he was triggered by Weber’s pointing out that it was his white male privilege that obscured his understanding.

The next day, police captain Carri Weber was put on paid administrative leave and put under investigation. Arndt filed a discrimination complaint against Weber. Then today, December 7, Weber went before the ethics board for her city. She was reinstated to her job, but was reprimanded for speaking out. For his part, Arndt was suspended without pay for two days.

You can view the video of the incident here:

Alaska's fiddling sociologist
View all posts by sineanahita →
This entry was posted in Uncategorized. Bookmark the permalink.