Posted on February 2, 2014 by sineanahita 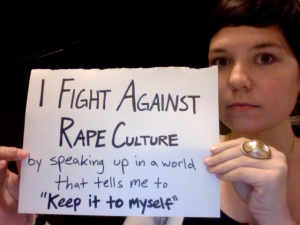 After the University of Alaska Fairbanks (UAF) Title IX coordinator released confidential documents related to my Title IX complaint to the student newspaper, “someone” leaked them to the local newspaper and two national news outlets. The result was a barrage of anonymous and non-anonymous blog comments, tweets, and emails. One of the emails was copied to my department. Nearly all of the comments were extremely negative, and are the usual stuff that misogynists say to discredit feminist activists: she’s ugly; she’s a lesbian; she’s fat; she can’t get a man; she’s a feminazi; she’s crazy; she smells bad; she’s not even female. These sexist pronouncements are emotionally powerful because they stab at the heart of what it means to be female in contemporary American society.

Amanda Hess writes that women bloggers are disproportionately targeted for online hate. Critical power conflict theorists, which is the sociological paradigm in which I find the most value, would analyze the haters who post sexist and heterosexist comments online as doing the dirty work of patriarchy. Similarly, poor and working class people do the dirty work of militarism and nationalism by fighting America’s wars.

Several courageous women who have been trolled online have posted the comments they received. As an antidote to the online hate, and as a way to contribute to the data about online misogyny, below are some of the choice comments that were posted about me in November and December, 2013. But first, an acknowledgement and a big thank you to the people behind the Fight Rape Culture blog who published the photograph above. http://endrapeculture.files.wordpress.com/2012/11/fightagainstrapeculture.jpg

“There sure isn’t any shortage of batshit liberal pukes. Look at this moonbat’s picture. If she didn’t stink like a tuna sandwich in the sun no one would ever figure out that she’s a woman.”

“She’s so ugly I wouldn’t rape her with a dead man’s penis.”

“She would never, even if she was the only woman on an island with thousands of men, have to worry about being raped.”

“if THAT is a picture of her, i think she “doth protest to much” as a reaction to her inner desire to partake in the sex she doesn’t stand a chance of ever getting.”

“What that femiNazi needs to do is go in search of a sense of humor. That is not sexual harassment; true sexual harassment is something she need never worry about, judging from her mouth and her photo.”

“Dear Feminists, Please get a Life . Perhaps get laid, get over yourselves we are tired of hearing from your twisted little selves”

“We have been giving these idiots “enough rope” for long enough…now the knot is growing ever tighter on their foolishness. Let these morons keep talking, fewer and fewer people are listening, and every stupid word that comes out of their mouths is rushing the end of any type of credibility they might have once had.”

“Feminism is full of hypocrites, left wing whack jobs, man-haters and transphobes. Not to mention how laughable it is that feminists will scream about ‘rape culture’ in the 1st world but almost totally ignore how much more rampant rape is in the 3rd world. And then there’s all the mental gymnastics the so called pro choicers will get into over abortion. Especially when it involves people getting them when they realize their baby is a girl.”

“Most Feminists are angry because they can’t get laid ….seems a lot of them turn Lesbian”

“rape culture? I don’t think she needs to worry about a stiff penis being near her ever.”

Alaska's fiddling sociologist
View all posts by sineanahita →
This entry was posted in Uncategorized. Bookmark the permalink.